A work of art that draws not only tourists and art lovers from all over the world, but also pregnant women and those hoping to have children 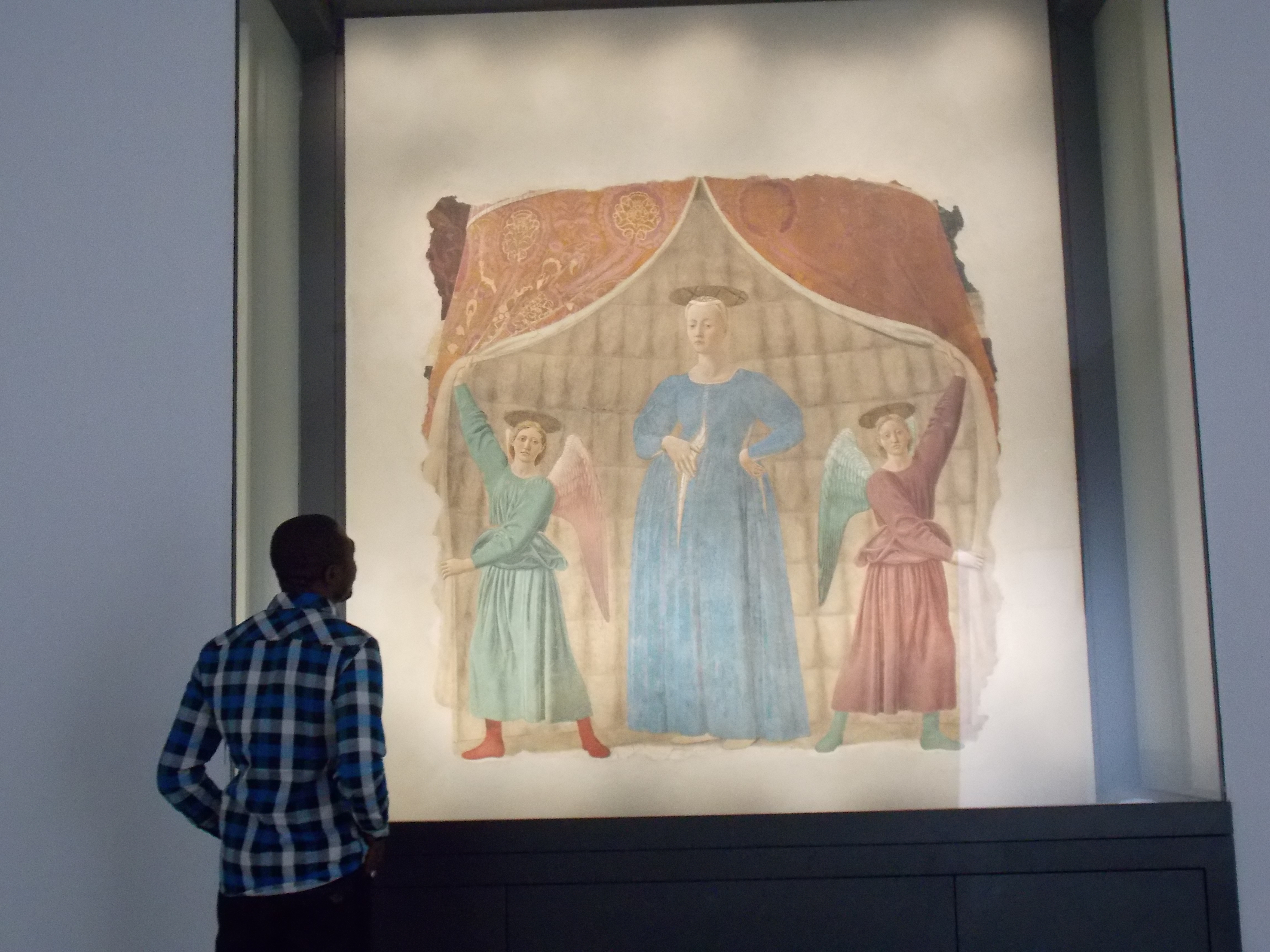 I find this fresco really curious

Monterchi, is a small Italian municipality nestled on the hills not far from Arezzo. At the heart of this sleepy hill town is a famous artwork that straddles the divide between art and faith and has drawn millions of people from around the world.
In the 15th century, early renaissance artist, Piero della Francesca travelled to his mother’s village, Monterchi, to be by her side as she died. In a period of seven days, he worked on a mural on a church wall which has become the most significant cultural attraction of the town and remains so till date.
Piero’s fresco titled Madonna del Parto was unusual even then because it featured a depiction of a pregnant Virgin Mary flanked by two angels. Such depictions were unheard of. The Virgin was often depicted with a child, not pregnant.
The fresco was completed, (possibly around 1460) using blu olteremare drawn from lapis lazuli imported all the way from Afghanistan and 500 years later, despite exposure to the elements and surviving a devastating earthquake, it retains its original colours.
The Virgin Mary, donning in a blue maternity gown, posing modestly with her face cast down is thought by some experts to be bearing the expression of a woman who is contemplating her pregnancy. Others see the face of a belaboured woman entrusted with a burden she wasn’t prepared for. Whatever it was, her face tells its own story, one that may be far from the acceptable narrative that has been fostered and handed down over the centuries.
By her side, there are two winged angels, obviously drawn from the same cartoon flipped over, holding aloft the curtains of a tent featuring arabesque looking directly at the spectator.
For centuries, the fresco stood on the wall it was painted on, in the Santa Maria di Momentana, until the little church was destroyed in an earthquake in 1785. The upper part of the fresco was affected, but the rest of it survived and was detached and moved to the new cemetery chapel. And in the intervening years, the shroud of time covered the painting and its origins in mystery.
It was not until 1889 that Piero was identified as the painter of the work. To date no one knows exactly why he chose to paint it in that little church or why he chose to portray a pregnant Madonna and no one knows who commissioned the work.
In 1992 the fresco, now only a fragment of a wall, was moved to Museo della Madonna del Parto, a musuem in Monterchi dedicated solely to the fresco.
In the museum’s reception, Sara Boncompagni directed proceedings from her place behind a counter. She ushered people into the souvenir shop where key holders, mugs and other memorabilia bearing marks of the fresco are sold.
“We receive about 35 thousand visitors annually,” Sara said.
Many of the visitors are pregnant women or women hoping to conceive. For these women, visiting the museum is not just tourism or even art appreciation, it is a pilgrimage.
“Many of them come here to offer prayers to the Madonna to bless them and help them with their pregnancy,” Sara said. 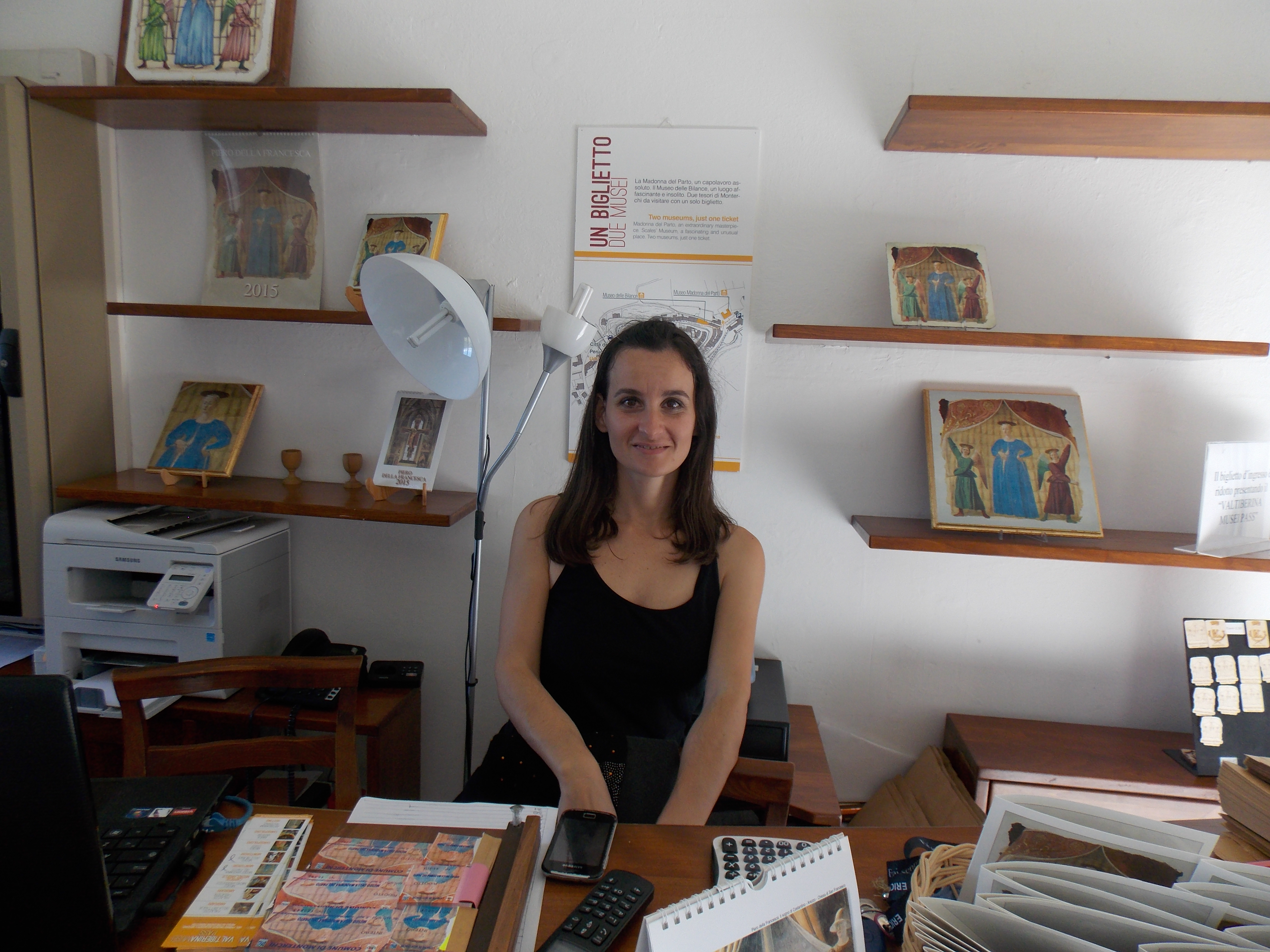 In the main exhibition room, the Madonna del Parto was installed on a wall and well lighted. The temperature and humidity is controlled to preserve the fresco. Against a wall there was a lone bench where visitors can sit down and enjoy the artwork.
A cardboard box was placed just beside the painting. It was almost filled with scraps of papers, mostly handwritten notes in Italian. They were special prayers and wishes by the women seeking the intervention of the Madonna in their quests to have children.
A woman came in and knelt before the fresco. She bowed her head in sullen devotion, and muttered prayers under her breath. Finally she crossed herself and left.
“They believe the Madonna can intervene for them,” Sara explained. “It is a matter of faith and has been going on for years and years.”
Every now and then the notes in the box are collected and incinerated. No one reads them.
“They are meant for the Madonna,” Sara said “We would love to keep them but we get so many of them that we don’t have the space to keep them.”
In the other room of the museum, there is the extensive souvenir shop where postcards, pencils, T-Shirts and more souvenir branded with the Madonna are sold. In another room, there were other artefacts connected with the fresco. One was another fresco of a dome commissioned much, much later to replace what was lost in the earthquake when the original suffered some damages. The difference in the quality of the two works and the materials used is quite clear even to an untrained eye. The later fresco has faded while the original retains its more regal hues.
As popular as the fresco is, much of its history has gone largely undocumented and even today, no one can tell why Piero decided to paint a pregnant Madonna. Experts have hazarded that it may have something to do with the old pre-Christian fertility tradition in Monterchi. In the old days, women climbed up the hill and bathed in a spring thought to possess some miraculous fertility powers.
When Christianity came, that practice was replaced with a devotion to a wooden figure of the Virgin Mary. Whether Piero’s fresco draws from this tradition remains unclear.
What is certain however is that this painting, in this little museum has made Monterchi a haven for people who seek the face of the Madonna, whether for arts, culture or pregnancy. 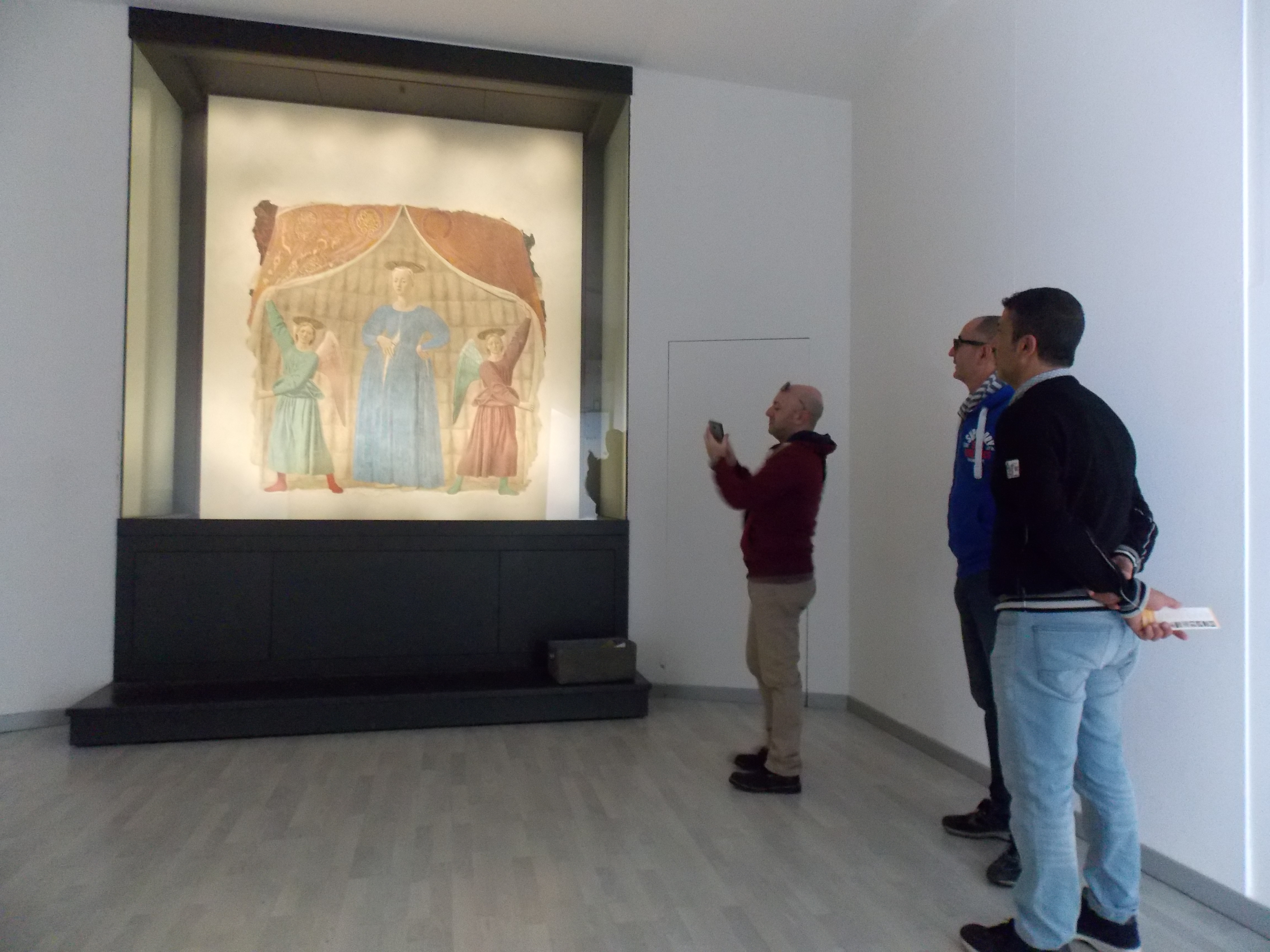